I remember one of the biggest headaches when I found out we were moving to China was figuring out what to pack. I had no idea what to expect and was completely overwhelmed. Will I be able to buy what I need when I get there? What is and isn’t available? What if I don’t pack it and then they don’t have it? What if I forget something and then need it???

(There are several things on this list that I didn’t bring the first time… I was lucky enough to make a trip back to the States just 2 months after we moved. The result was one of our return bags weighing 87 pounds!)

I did do some research (a lot, actually) but realized that much of it seemed outdated, especially considering how much China has changed in the last 10-15 years. The smartest thing I did was to get in touch with several other expats who made the move months before I did to get advice.

The amount of stuff you’ll bring with you will obviously depend on how much shipping space you are allotted. However, all of these things were “must haves” for me. Hopefully, my list will give you a starting point, and feel free to comment or email me if you have any questions on other items you are considering.

I’m really not sure why you can’t find deodorant here, but you can’t. Chalk it up as a big cultural difference, I guess? I don’t know whether Chinese people just don’t sweat or they do but don’t feel the need to mask the smell that comes along with it. But either way, you’ll need to pack a supply of deodorant for as long as you’ll be China. You won’t be able to buy it here.

Let me preface this by saying, I was totally a desktop girl before we started this whole adventure. The Left Brain built (yes, built. He’s awesome like that.) me a REALLY nice, souped up desktop for my birthday a couple of years ago and I love it! It is much faster and has more storage than nearly any laptop on the market. However, with the amount of traveling that goes along with an expat assignment, I really think a laptop is necessary. I got a 13″ MacBook Pro

the day before we left and I have to admit it is really handy. We can hook it up to the TV to watch DVD’s or stream internet TV (with the Apple you’ll need a Mini DisplayPort to HDMI cable

). It’s small and easily fits in my shoulder bag when we’re traveling. And it’s great for blogging on the go!

The other thing you’ll need to go along with your laptop is a good VPN service to access the internet through the Great Firewall of China (which blocks Facebook, Twitter, YouTube, etc. and you can’t live without that, can you?) We use Witopia.net and it is a great service. Maybe pricier than some, but they have servers all over the world (so you can pretend you are in nearly any country you want to depending on the website you want to access.) And their customer service is fantastic. We have the Combo plan at $69.99 per year, which lets me connect my laptop through PersonalVPN plus the iPod Touch through PPTP. Works great. Plus, that’s only $6 per month and with the cheap internet rates here, you’re still getting out cheaper than you’d be paying for internet service in the States.

Ok. I know this seems like an obvious thing to pack, but here’s the thing… unless you have relatively small feet you won’t be able to buy shoes here. That means you need to make sure you have shoes for all seasons. (Ladies, the streets are gross… you can skip the open toes and sandals and save the packing space. I seriously doubt you’ll want to wear them after you get here. I know… it’s a bummer!) The largest woman’s size I’ve been able to find here is a European 40. To give you an idea, I wear a US 8.5 which seems to be around a 41. Men, a US 10 is the biggest size you’ll find (and those are sometimes difficult.)

In a country with half a billion women who are most likely NOT pregnant thanks to the one child policy, it is truly beyond me why you can’t find a normal tampon around here. Seriously, Tampax… where are you?? There is a huge aisle in most supermarkets devoted to feminine hygiene products, however, the ONLY kind of tampons I’ve been able to find here is a box of OB that was apparently made for fairies or something similar in size.

This box apparently contains 8. Tell me how that is possible?

You probably already know that Chinese people drink tea. Not the amazingly sweet and syrupy stuff we drink in South Carolina. But hot tea. They aren’t really into coffee. Which I find incredibly unfortunate. I LOVE coffee. Starbucks is making it more popular and you can find several small coffee shops selling espresso drinks, but brew at home is a little trickier.

We have both Starbucks and Dunkin Donuts here in Shenyang, and they sell ground coffee. (Not whole bean though. And no decaf.) Many of the import stores sell ground coffee too (although none of it is as good as Dunkin’s, and no decaf there either). However, getting a coffee maker is another story. You can find them here. Metro sells several, but the cheapest one is around $80 US, and that is for a 4-cup, off-brand, cheapo that would cost you $15 at Walmart and probably makes bad coffee. 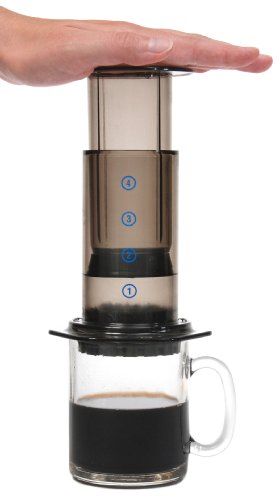 Don’t get me wrong. I would spend $80 for a coffee maker, just not one that makes bad coffee. For those of you in countries with 220-volt electricity, count yourselves lucky. I couldn’t even bring my coffee maker with me since it was made for the US 110v power.

My solution was this nifty little contraption I found on Amazon called the AeroPress Coffee and Espresso Maker. It makes great single cups of coffee (or up to 4 at a time) and doesn’t use electricity so I don’t have to worry about voltage no matter where I am (it goes with me when we travel too.) It is essentially a French Press, but it’s faster and easier to clean. I also packed a small hand-held grinder for my whole bean coffee (which you’ll need to bring because they don’t sell it here unless you make friends with one of the coffee shops).

Most over the counter medicines can be found in China. And the nice thing is they are cheaper than you can get in the States. However, I would suggest packing a pretty good supply to hold you over until you can figure out where to get them. There is nothing worse than getting sick and having no idea where to get the stuff to make you feel better. Definitely pack some Pepto for an upset stomach, some cold and cough medicine, allergy medicine, and pain relievers.

This also probably goes without saying. But remember to pack this somewhere handy. You’ll need it as early as the taxi ride from the airport. If you are going to one of the bigger cities like Hong Kong or Shanghai you may find someone who speaks English. Anywhere else in China… don’t count on it.

And any other spices you are particularly fond of cooking with. I packed big jars of both of these and I’m very glad I did. You can find a lot of the spices we use in the US like basil, parsley, and oregano, but it took me a while and they are in the import store. Garlic powder, salt, pepper, red pepper, and five spice are everywhere. Anything Mexican or Southwestern is non-existent. (Dang it, I would kill for some guacamole right now.)

#9. Kindle or other E-Reader

Kindle 3G Wireless Reading Device, Free 3G + Wi-Fi, 3G Works Globally, Graphite, 6″ Display with New E Ink Pearl Technology You won’t find English books except in the largest tourist cities. You may be able to find some of them on Amazon.cn or Ebay but remember China censors what printed materials come into the country also. The best thing, especially if you’re an avid reader like me, is to pick up one of the new e-readers. We got the Kindle 3G Global Wireless which is fantastic (and dangerous. it’s so easy, it can get expensive fast.) because you can download books instantly anywhere in the world via wifi. We love the Kindle because it reads just like a book. I know a lot of people say that the e-readers are just not the same as reading a real book, but the Kindle is incredibly close. It isn’t backlit (which means you can’t read in the dark without a light) and therefore doesn’t make your eyes tired like a computer screen. Actually, we love ours so much we had to get a second because we fought over whose turn it was to use it.

You’ll want to make sure you bring things that make your new place feel like home. This will probably be different for everyone. This can be photos or artwork or decorations. The thing we were very glad we packed was our blankets and pillows from home. It was so nice when the shipment came to be able to curl up on the couch with my favorite fleece throw. A mattress topper is a good idea if you have room as the beds here are like concrete. Don’t bother with sheets though. The bed sizes are different and it’s unlikely they’ll fit.

Like I mentioned before, the list will be different for everyone. But if any of these are things you like to have around, you’ll want to bring them with you when you move to China.

What else should be added to the list? What would you be sure to pack when moving to the other side of the world? What couldn’t you live without?